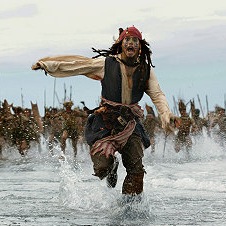 Following the trail of the latest Hollywood blockbuster is a popular choice travel agents are starting to offer. Theres the Da Vinci tour for instance, which lets fans of Dan Brown’s Da Vinci Code see the city of lights through the bestselling book’s mysterious spots. For fans of pirates, however (or Johnny Depp perhaps), there is now a way to see the real thing, rather than just the beloved ride at Disneyland.

Pirates of The Caribbean 2: Dead Man’s Chest was filmed in the Carribbean island of Dominica in 2005 and now several tour companies and resorts offer travellers a variety of ways to get a feel for the place where pirates once roamed (as well as see the exact locations where the film was shot).

Heres an interesting tour I found,which runs for a week and costs US$1300 for the first person and US$600 for each additional person. The tour includes food, transport to & from airport / ferry terminal, all taxes and transport to sites, but does NOT include accommodation. As the tour is offered by the Three Rivers Eco Lodge, guests may stay here, which I’d recommend for their brilliant environmental achievements. More about this interesting place to stay in my next post.

“Discover the truth about the Carib Indians, visit Prince Rupert Bay and see where the Black Pearl was anchored, and follow in the footsteps Johnny Depp.”
The itinerary :

* The activities may be spread over a longer period of time to give you more free time in between activities.