Ever since 9-11, aviation security have alerted to the threat liquid explosives can present. All of a sudden, drinks, food and toiletries were being banned from the airports worldwide. Nowadays, security has eased up a little, but the rules to keep all liquids, aerosols and gels in check are still being enforced. If you have plans to fly in the near future, it pays to be in the know about 3-1-1.

3-1-1 is the aviation industry’s catchphrase to help you remember easier how to pack liquids. If you’re going to keep your liquids in your checked bag, there’s should be no problem, but if you’re planning to take the liquids through the checkpoint and onto the plane, then you’ll need to follow the rules for packing liquids. The rules are actually simple:

Once you get to the security checkpoint, you need to take your baggie out of your carry-on and put it in a bin. If you need to bring liquids more than 3 ounces, you’ll have to place it in your checked bags. The 3-1-1 rule applies to toiletries like perfumes, toothpaste, shampoo and lotions, as well as to drinks like water, juices or liquor. It also applies to food, such as jams, jellies, dips and dressings. Certain items, like medications such as insulin, ointments and medicine in syrup form, as well as infant needs like breast milk and baby formula are considered exempt. You can bring them through the checkpoint in larger amounts (but in reasonable quantity), as long as you declare them to a security officer.

So you’re all ready for your trip. You’ve got your tickets, all your necessary travel documents and your proofs of identification (at least two). You’ve packed your bags, the ones for check-in and carry-on, and made sure they’re correctly and visibly tagged with your name and address. With everyone heading home for the holidays, you want to make sure get on your flight in time. Here’s some tips to help you breeze through the checkpoint:

I guess the best advice I can give you is to keep your cool and follow all the security guidelines. And for heaven’s sake, don’t ever joke that you’re carrying some kind of bomb with you. After 9-11, airport personnel lost all sense of humor, and you’ll most probably end up being thrown out of you’re flight and being detained by authorities!

It’s the season to be merry, but with the onslaught of the holiday travelers, keeping your temper can be a little tricky. With the airports getting more crowded, the traffic getting worse and the check-in lines getting longer everyday, keeping your flight schedule may need a little more effort on your part. To avoid inconvenience, and ensure a hassle-free, express check-in, here are some tried and tested tips:

If you’re crazy about Christmas, and count St. Nick as one of your heroes, then it’s time for you to visit Santa Claus, Indiana. This town, which was established in 1856, has the world’s only post office to bear the name of Santa Claus. Chances are, the letters you sent to Santa has been routed to their post office. Because of this, a group of volunteers known as “Santa’s Elves” ensures each child receives a reply from Santa Claus, a tradition that has been around since 1914. The Post Office also prints the only official Santa Claus postmark, a Santa Claus picture postmark that’s available only during the Christmas season.

Of course, the whole town has capitalized on the whole Christmas theme. There’s Christmas Lake Village, where the street names are all themed after the season as well. The area’s 3 lakes are called Christmas Lake, Lake Holly, and Lake Noel. There’s also Holiday Village and Santa’s Lodge, a Christmas-themed hotel.

There are a lot of attractions to be found in the area as well, majority of which are also themed towards Christmas. There’s the Santa Claus Museum, Frosty’s Fun Center, Mushie’s Car Museum, Christmas Lake Golf Course, Lake Rudolph Campground and RV Resort and Santa’s Candy Castle. You can also find the Lincoln Boyhood Home & National Memorial and the Lincoln State Park here.

The biggest draw in this area is the Holiday World & Splashin’ Safari. This park, which was originally built by the late industrialist Louis J. Koch in 1946, holds the distinction of being the world’s first theme park. It offers three wooden roller coasters, water rides, even free sodas and sunscreen!

Visiting during the month of December has added perks, of course. You’ll get to join in an old-fashioned Christmas celebration. And there’s the town’s annual 14-mile Festival of Lights which takes place around the first or second week of December. 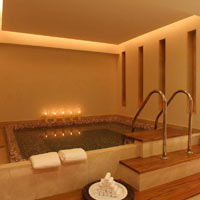 In case you’re planning to fly with Qatar Airways, and assuming you can afford it, buy first-class tickets so you’ll get a chance to check out their Premium Terminal at Doha International Airport. It was rated as one of the best first-class lounges for 2007 by Skytrax, the iindependent airline industry’s monitoring agency. It opened last November 26, 3006, a week before the start of the 15th Asian Games that took place in Doha, Qatar.

The 10,000sqm Premium Terminal was built in just nine months, at a cost of US $90 million, as part of a US $200 million expansion at Doha International Airport. Designed to pamper and delight First and Business Class passengers, the terminal is open 24 hours a day, seven days a week. It’s located before the main departures building.

As one of the privileged First Class passengers, you’ll experience the Premium Terminal as another choice destination of your trip, rather than being simply a waiting room for your flight. There’s a concierge to welcome you assist you. You’ll have access to the spa treatment rooms, Jacuzzi, sauna and massage treatment rooms. For shopoholics, there’s duty-free shopping. There are fine dining restaurants with a wide choice of hot and cold Arabic and international cuisine. For business travelers, there’s a business centre with free internet access stations and secretarial services, as well as the use of conference and meeting rooms. And for families with kids, there’s a nursery and a dedicated play area for older kids. You can even leave your kids to the care of nannies while you shop or relax to your heart’s content. There’s also a 24-hour medical centre manned with doctors and nurses. And if all these still sounds like too much work for you, you hibernate in their exclusive sleep cabins, then freshen up with a shower when your flight arrives.