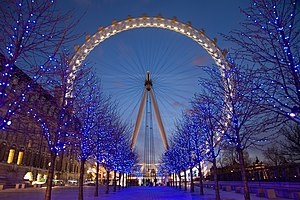 If you’re planning to visit London, don’t forget to check out the British Airways London Eye. Also known as the Millenium Wheel, it’s touted as the world’s tallest observation wheel. Designed by architects David Marks, Julia Barfield, Malcolm Cook, Mark Sparrowhawk, Steven Chilton, Frank Anatole and Nic Bailey, the Eye was opened to the public in March 2000. Since then, it has been one of the most popular tourist attractions in London. The London Eye is the perfect way to view London and some of the city’s most famous sights, the Houses of Parliament, Canary Wharf, Big Ben, Windsor Castle, are just a few of the 55 attractions that can be admired from the top of the arc. On a clear day, you can even see up to 25 miles away in every direction. The London Eye stands 135 metres high above London. It moves at a slow pace, the flight takes approximately 30 minutes. Here’s some more interesting facts about the London Eye:

• The Eye used 1,700 tonnes of steel and was constructed in just 16 months.
• The capsules can carry over 15,000 visitors a day.
• On average the Eye travels at a speed of 0.26 metres per second and makes 8000 rotations a year.
• The wheel does not usually stop to take on passengers: The rotation rate of the BA London Eye is so slow that the wheel doesn’t even have to stop to take on passengers. Passengers can easily walk on and off the moving capsules at ground level. It is, however, stopped to allow disabled or elderly passengers time to embark and disembark safely.
• The London Eye has been used in several movies. In the 2007 movie Fantastic Four: Rise of the Silver Surfer, the London Eye is damaged and the Fantastic Four must prevent it from falling into the Thames.
• It was featured during a “Wizard Chase” scene in this year’s Harry Potter film, Harry Potter and the Order of the Phoenix.