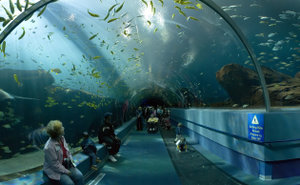 My kids love the ocean. They love the smell of it, swimming in it, and if they can live in it (like Ariel), they probably would. In fact, my eldest, who’s 7, announced her plans to be a marine biologist when she grows up, after a trip to the local aquarium. It’s a trait most kids, and even adults, share, this love for the water and the fascination for the creatures dwelling in it. So if you’re ideal vacation is spending time near the water, with loads of learning for the kids as well, why not try visiting your local aquarium? Or better yet, take a special trip to visit the world’s largest aquarium, the Georgia Aquarium.
The Georgia Aquarium is located in Atlanta, Georgia at Pemberton Place, across from Centennial Olympic Park in downtown Atlanta. It opened on November 2005, and encompasses 550,000 sq. feet with more than 8 million gallons of water. Aside from the marine and fresh water displays housing more than 100,000 animals of 500 different species, it also has two gift shops, a food court, and even a school program, The Learning Loop. The aquarium is famous for having the only whale sharks in the U.S., four young whale sharks named Alice, Trixie, Yushan, and Taroko. They also have four beluga whales, Nico, Natasha, Marina, and Maris.
The aquatic animals are displayed in five different galleries, Georgia Explorer, Tropical Diver, Ocean Voyager, Cold- Water Quest, and River Scout. They each correspond to a specific environment. The Georgia Explorer is the exhibit geared especially towards children. It features a number of touch tanks with rays and sharks as well as exhibits featuring sea turtles and wildlife. The second exhibit, River Scout, features an overhead river where visitors can see piranhas, electric fish, and other unusual freshwater life. The Cold Water Quest features animals from the polar regions of the world and contains most of the mammals, including the beluga whales, sea lions and penguins. The fourth exhibit, and biggest exhibit, the Ocean Voyager, features almost 100,000 fish and showcases the aquarium’s whale sharks. It has a 100-foot-long tunnel that surrounds visitors with water on three sides and features a floor-to-ceiling window, and for a more focused look, numerous smaller lower-level windows. It also houses the Open Ocean Touchwall, a touch-screen wall that allows kids to press a digital fish as it swims by and to learn fun facts about all of the sea creatures in the exhibit. The final exhibit is the Tropical Diver, an exhibit that features many curious and haunting forms of aquatic life, including a living reef with live coral.
The aquarium also features a “4D” movie and several supervised touch pools, crawl-through tunnels, pop-up windows that give kids a close-up view of penguins and piranhas, joy sticks to control a camera that displays close-up shots of animals, and a playground with a rubber floor, crawl tubes, and a whale slide. The aquarium also offers a behind-the-scenes tours for families and a weeklong summer day camp for kids ages 5 to 14 (Camp H2O). They’re even available to host a birthday or children’s party for kids ages 12 and under, with four main themes and a party coordinator. 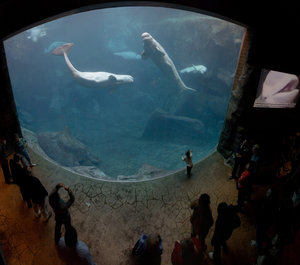