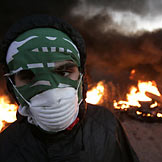 Lebanon – The August hostilities with Israel is over (for now), however extremists groups make Tripoli, Sidon and Palestinian refugee camps dangerous. In the southern part of Lebanon land mines are still a big problem.

Liberia – Despite the fact that the civil war in Lebanon ended 4 years ago and that there are still 15,000 UN peacekeepers scattered all over Lebanon, it is still considered to be too dangerous for tourists since crimes like theft, sexual assault and murder is still commonplace.

Sudan – If you really want to go to Sudan at least stay away from Darfur. Darfur is not safe for locals much less tourists where violence is an everyday thing thanks to the government-backed militias. As for

the rest of Sudan there are terrorist attacks every now and then. Caucasians are also considered a prime target for kidnappings.

Côte d’Ivoire – The north and northwest part of Côte d’Ivoire are the most dangerous parts in the country since they are still under the control of armed rebels. However, even if you do stay away from the north the situation there is still pretty volatile. The crime rate is also on the rise with carjackings and armed robbery getting more common.

Haiti – Haiti is inching its way towards political stability but is still a significantly dangerous place to visit. Kidnappings is a problem and violence is common. Despite the presence of 8,000 UN peacekeeping troops it

remains classified as a high security and travel risk.