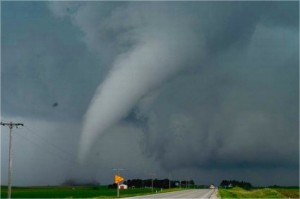 The last time that we had a storm, I was kept up all night by the howling winds and my husband’s screams of delight. He was out there in the balcony watching the winds batter the trees, reveling in the sound of the thunder, and enjoying the rain on his face. If I had let him, he would have walked up and down the street enjoying the storm. I guess he would enjoy the new kind of vacation that seems to have gained a huge following in the recent years.

According to Jacquelyn Lewis, storm chasing vacations are the in thing for adrenaline junkies these days. While majority of the American people tend to run away when hurricane and tornado warnings are sent out, these people actually run toward the direction of the storm. And they are not doing this alone, mind you. There are actually agencies which cater to this kind of preference. Lewis expounds in her article:

“There are a lot of adrenaline junkies out there,” says Roger Hill, a Denver-based storm chaser of more than 22 years. “A lot of people are just fascinated by severe weather.” He should know — for more than 11 years, he has been leading groups of them on storm-chasing vacations organized by Silver Lining Tours, a company he co-owns with fellow chaser David Gold.

Silver Lining is one of several companies that, for a few thousand dollars, will take you on the ride of your life, tailing twisters and tempests through Tornado Alley in a vehicle equipped with high-tech equipment. You’ll get closer to the action than you ever could — or should — on your own.

This kind of reminds me of the movie Twister (I might be wrong about the title). You know, the researchers get on a high when they get near a tornado. I suppose that this provides an alternative means of vacation for some. I don’t know if I have the guts to actually chase a tornado, though. Would you?