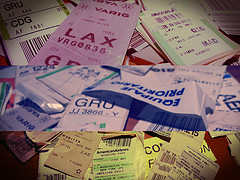 You’ve probably heard all about it by now. American Airlines is the first major American carrier that is charging their clients for the first piece of checked luggage. It does not come as a surprise for some people. They have actually seen this coming. Why haven’t I?

It is understandable that airline carriers would charge for the second, third, even fourth, piece of luggage. But a charge for the first one? This is utterly ridiculous! Every traveler feels – and knows – that it is his right to have one piece of luggage free when he flies. It has always been this way and I believe that it should be.

Then again, I am not part of the airline industry. They must have their reasons, no? According to Charles Leocha of MSNBC:

The airlines have long realized that they have a treasure trove here if they could find a way to monetize the luggage they are carrying. Corporate studies have been ongoing for years and boardrooms have tackled the situation regularly. However, only in the last year-and-a-half have the major airlines taken steps to charge for the luggage they used to transport as part of the airline ticket price.

So it’s all about money, isn’t it? Why am I surprised? They operate to make money in the first place. Then again, what about the traveler?

I do not know what is going to happen in the ensuing months but one thing that I am pretty sure of is this: if AA took this first step, other major airlines will probably follow suit. That is not good news for us travelers. It’s either we stop flying altogether, pay up, or take just one carry on bag.