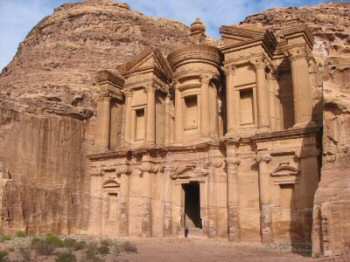 The City of Petra in the Middle Eastern nation of Jordan was one of the seven sites that gained the distinction of being the new seven wonders of the world. The accolade was awarded July 7 of this year in Portugal. Though the name Petra doesn’t exactly ring a bell, pictures of the site would probably be familiar to a lot of older people – especially those with a pulse of pop culture.

The structure itself is a complex of buildings carved into the side of a rock mountain. And no, they are not mere dwellings and unadorned edifices, the extravagance of the old settlers of the “Red Rock” is palpable with their construction of monasteries and amphitheaters. The city of Petra gained iconic status when one of the most recognizable movie series of our time Indiana Jones shot “Indiana Jones and the Last Crusade” using the stunning rock city as the temple wherein the Holy Grail was supposedly kept.

Clearly, the place would thrill adventure movie buffs, but it could also appeal to those who have appreciation for various world cultures. Due to the strategic location, the city was almost always under siege. Due to this, various influences of Arabian, Greek and local Jordanian architecture could be seen in the buildings of the complex. It’s a truly captivating site. It’s almost two thousand years old and the effort that it took to carve it out of a mountain is beyond mind-blowing. Visitors may go around the vast site by hiring a ‘taxi’ – i.e. a donkey that could scale the rock face.

The closest major airport is the one at Amman and it’s fairly easy to get accommodations considering that Petra gets close to a million visitors yearly.