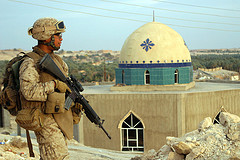 It used to be that Iraq was definitely NOT part of people’s travel plans. It is a pity because Iraq, like many countries in the Middle East, has a lot to offer in terms of tourism. It is thus good news that pretty soon, maybe, most people from all over the world may be able to visit Iraq and experience its wonders for themselves.

The Associated Press recently published an article detailing how the government is looking to tourism to give the country’s economy a boost:

Iraq’s government is beginning to promote tourism. It will be a tough sell — and even if officials can grab the attention of the adventuresome, Iraq’s tourism facilities are shabby.

The opening of a new airport Sunday in the southern city of Najaf is expected to help boost the number of religious pilgrims, mostly Iranians, visiting Shiite shrines to 1 million this year, double the number that came in 2007.

Pilgrims are admittedly a special kind of visitor. “They do not consider any kind of danger or harassment. They have a religious ideology that considers any difficulty they face as a merit and mercy for their piety,” said Abdul Zahra al-Talaqani, spokesman for Iraq’s tourism ministry.

Iraq is thinking about more than pilgrims, though. Last week, officials displayed tourism posters and said they are intent on attracting visitors to Iraq’s fabled archaeological sites, many of them looted and damaged in fighting.

Personally, I would really love to have a chance to visit this part of the world. Looking at the practical side, however, I doubt that even today, it is safe to go frolicking around Iraq. Then again, who said that adventures have to be safe?

How about you, would you consider going to Iraq as a tourist anytime soon?