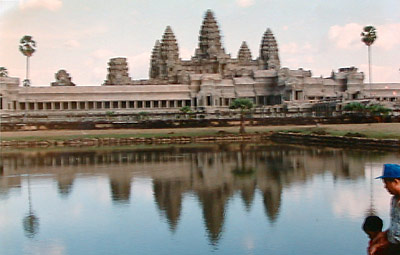 Angkor the kingdom of Khmer rulers from the eighth to the sixteen century, think Raiders of the Lost Arc, and the Temple of Doom, and registered on UNESCO’s world heritage list in 1992. It is mostly the religious buildings that remain as they were built as palaces for the gods in brick, laterite and sandstone.

The royal palaces do not remain as they were made of the perishable materials, wood. There has been significant pilfering of sculptures of Buddha and deities at Angkor, what remains are impressive structures and their stone carvings. The Khmer hardly left a surface uncarved on their temples and many of the structures are from the twelfth century.

Angkor Wat is the largest religious monument in the world and was built in the twelfth century. It covers a total area of almost 200 hectares and is surrounded by a moat. The temples covers about nine hectares and in the remaining area lived 12,640 people. The royal palace would have been located to the north of the temple. The land lots are clearly visible.

Outside of Angkor Wat many more people lived who supplied Angkor Wat with food and cloth. The temple is made up of three pyramids that ascend to the sky and is surrounded by a gallery with Hindu inscriptures such as the Battle of Kurukshetra. Inside the temple are four basins that look like swimming pools but had some other purpose which is not clear.