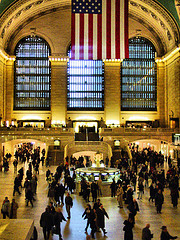 Broadway
If you have extra cash to spare and you like the theater, then Broadway should not be missed. Some say that you have never really seen what a play has to offer unless you’ve seen it in Broadway. This point is debatable but the fact is that a Broadway experience is really something else. Of course, you have to be ready to pay for that experience – tickets can easily cost over a hundred dollars, even for discounted ones! Alternatively, you can pick from New York’s countless theaters if you cannot afford Broadway – don’t fret, many of use can’t! Theaters abound in New York and you can watch a good play for less than $50.

Grand Central Station
Another landmark of the city, the Grand Central Station is one of the places that you should not miss. Even if you do not plan on taking the train, there are tons of things to do within the premises. There are also free tours which you can participate in.

Central Park
A leisurely afternoon in Central Park should definitely be on your agenda. You can choose to take a stroll on your own or you could participate in a free walking tour.

NBC Studio Tour
I am sure your teenager loves to watch TV – if so, then head on over to the NBC Studios and book a tour. You can also take a tour of the famous Rockefeller Center, which houses the studios.