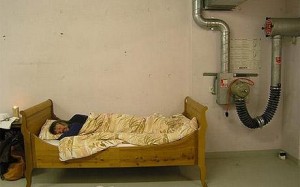 While the rest of the world tries to out-compete one another in creating a hotel with the highest possible star rating, two brothers from Switzerland have set up a hotel with a ZERO STAR rating. I can just imagine how austere this kind of hotel would be.

According Frank and Patrik Riklin, who are by the way twin artists, the hotel was originally an art project. They wanted to make use of a nuclear bunker, of which there are many in the country. This particular nuclear bunker is located in the small town of Sevelen, which is about one hour away from Zurich.

First a little background on the existence of nuclear bunkers – it used to be that every town had to have one. In the days of the Cold War, this was a mandate in the country. Now, these bunkers are still in existence but are not really put to use – hence the idea of the twins.

Fast forward to the present – the twins decided to convert the small town’s bunker into a hotel with the barest of amenities. What started out as a “project” has garnered a lot of interest, opening up the possibility for it to become a “real” hotel. Dubbed the Null Stern Hotel, it is the world’s first establishment of its kind.

Guests can expect Swiss Army style bunk beds, warm bottles for heat (a heating system would be too expensive for the bunkers!), shared bathrooms, unpainted walls, earplugs (to drown out the noise of the ventilation system), and complimentary chocolates on your pillow!

How much will this cost? Anywhere from 7 euros to 20 euros. The hotel is not yet open but if you are interested, you can get in touch with them through this e-mail address: [email protected]