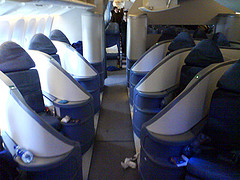 We took a look at two of the “fearless forecasts” that MSNBC has for this summer regarding airlines. Here is the continuation of that post.

Delays
Oops – so what’s new? I do not fly as frequently as other people but most every time I fly, I encounter delays. The worst I had was with a budget airline in Asia – 4 hours of waiting at a crappy budget airport! So anyway, MSNBC predicts MORE delays. I suggest that you make sure that you have ample time in between connecting flights if you are going to have to do it.

The weak dollar
Well it doesn’t really take a rocket scientist to figure this out. The US dollar has been going down for a long time now and it does not seem to be getting any stronger. I am no economic expert so I do not have any idea when and if it will get any stronger. However, if I were you, I would be prepared to have a weaker purchasing power if I were going to Europe. Asia wouldn’t be so bad – despite the weak dollar, it still is much stronger than most currencies in Asia. Still, you wouldn’t get as much for the dollar as you would have years ago.

No more perks
This is to be expected. What with the prices of gas going sky high, how can anyone expect airlines to continue giving away freebies? After all, they have to make money in order to keep going. So unless you are flying first class and paying for every little thing, do not expect to be treated like royalty during your flight.