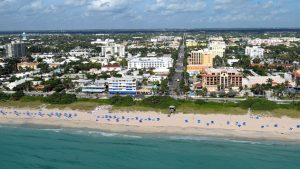 It is not uncommon for many addicts in recovery to move away from their current living situations after treatment. Often, it just is not a good decision to go back to their hometown. Familiarity is a slippery slope, and usually causes addicts to relapse much quicker than a fresh start.

The U.S. does have some excellent treatment centers located all over the continental states, but where does one go after treatment? It is scary for most users to visualize their life after leaving their chosen treatment center. Take a moment to read over this quick summary of a few of the safest sober-living cities in the U.S., and see if anything sounds appealing.

Delray Beach is in South Florida. It is nestled nicely in between Fort Lauderdale and West Palm Beach. To many in the world of recovery, this city has been deemed the “Recovery Capital of the World.” Even the New York Times mentioned the broad and vibrant recovery community.

The area has one of the highest concentrations in the world of treatment centers and halfway houses. There are more than 5,000 people each week that attend Delray Beach’s fifty-ish 12-step meetings. Delray has its own recovery-based radio station, biker’s club, and coffee house that sells its own cup of therapy.

Though Boston is widely known for its sense of smarts as the host of Harvard and MIT, the city is also known for its drinking. One study found Boston to be one of the booziest cities in the nation, but that also means there are plenty of treatment locations and halfway houses.

The sober community is just as vibrant as the nightlife. There are over 2,000 established meeting groups in Beantown, and they are all involved in a sort of exchange program. The “commitment exchange” program sends members to speak at other meetings in hopes of expanding their sober friend base.

Music City U.S.A. is one of the soberest cities in all of the United States. The citywide average drinks per week came in at just under nine. Nashville offers a relaxed, musical climate with several gorgeous outdoor recreational areas to keep citizens busy with other activities.

Though Nashville is not known for its drug and alcohol abuse issues, it does have some excellent treatment centers and sober living facilities. The city’s 12-step community boasts close to 300 separate AA groups and hundreds of other addiction-centered meeting places.

We have already established that the east coast of the United States plays host to a thriving sober community along its gorgeous coastline, but let us look at the west coast. Surprisingly, Los Angeles, California and the surrounding area has long been known for its recovery efforts.

LA County itself offers over 3,000 meetings per week, and the city of L.A. is famous for its high-class treatment centers. Also, the favorable year-round climate provides endless time for outdoor recreation and meditation.