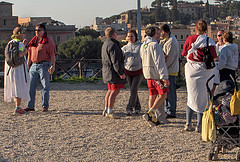 We have to admit, not everyone in the whole world loves Americans. It’s either because they have reason not to or that they have stereotypes in mind. I tend to believe that a lot of it is due to stereotypes. Naturally, when we visit a foreign country, we want to have as much fun as we can, without the stereotype of the “ugly American” getting in the way. Here are some tips to help you do just that.

Learn the basics of the language
Contrary to popular belief, not everyone knows how to speak English. Even in major cities in other countries, there are a lot of locals who are not able to speak basic English. It would thus be to your advantage to learn the basics. Greetings, asking for directions, saying please and thank you – these are some of the basic things that would be very helpful. More than the practical aspect of helping you get around more easily, knowing some of the local language just might endear you more to the people you encounter.

Don’t overdo your “costume”
Some people, when they go to another country, like dressing like the locals. The problem with this is that they apply their concept as to how locals dress – they stereotype as well! For example, people in Mexico do not dress like members of a mariachi band. You’d do very well to wear understated clothing. Do yourself a favor and check out the Internet to see how the people actually live where you are headed to.