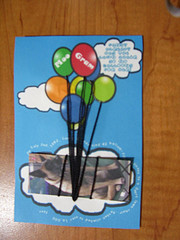 With all that talk about problems to expect when it comes to air travel, it’s about time that we talked about something on the lighter side, don’t you think? James Wysong recently wrote about 12 bizarre reasons for flight delays and I got a real kick out of it. Here are some of the funniest ones.

Lawnchair Larry
In 1982, a man attached helium filled balloons to a lawn chair and accidentally floated over LAX airspace at 16,000 feet. A Pan Am pilot preparing to land was the first to call about the spectacle. All flights and traffic ground to a halt while authorities dealt with the situation. Sound like an urban myth? Yes, but it’s true.

Yeah, this was featured in a show on either the National Geographic channel or the Discovery Channel. It has not happened since then but who knows?

Stuck in San Juan
Our flight was delayed landing in Puerto Rico for over two hours due to Iguanas on the runway. I thought they were joking at first, considering the size of an airplane compared to that of a lizard. Apparently, they grow them bigger down there and they can cause havoc on smooth landings.

Iguanas in Puerto Rico, cows somewhere else? This is what we get from encroaching into the natural habitat of animals. There’s nothing to do but wait.

Lucky delay
Leaving Las Vegas, a passenger won over $350,000 on a slot machine waiting for his flight. Understandably, he forgot about his flight and refused to leave the machine until his win was confirmed. Since he had checked bags, the airline had to search and remove his luggage. Somehow I don’t think he was too concerned about his luggage.

Now I wouldn’t mind being this passenger – anytime!